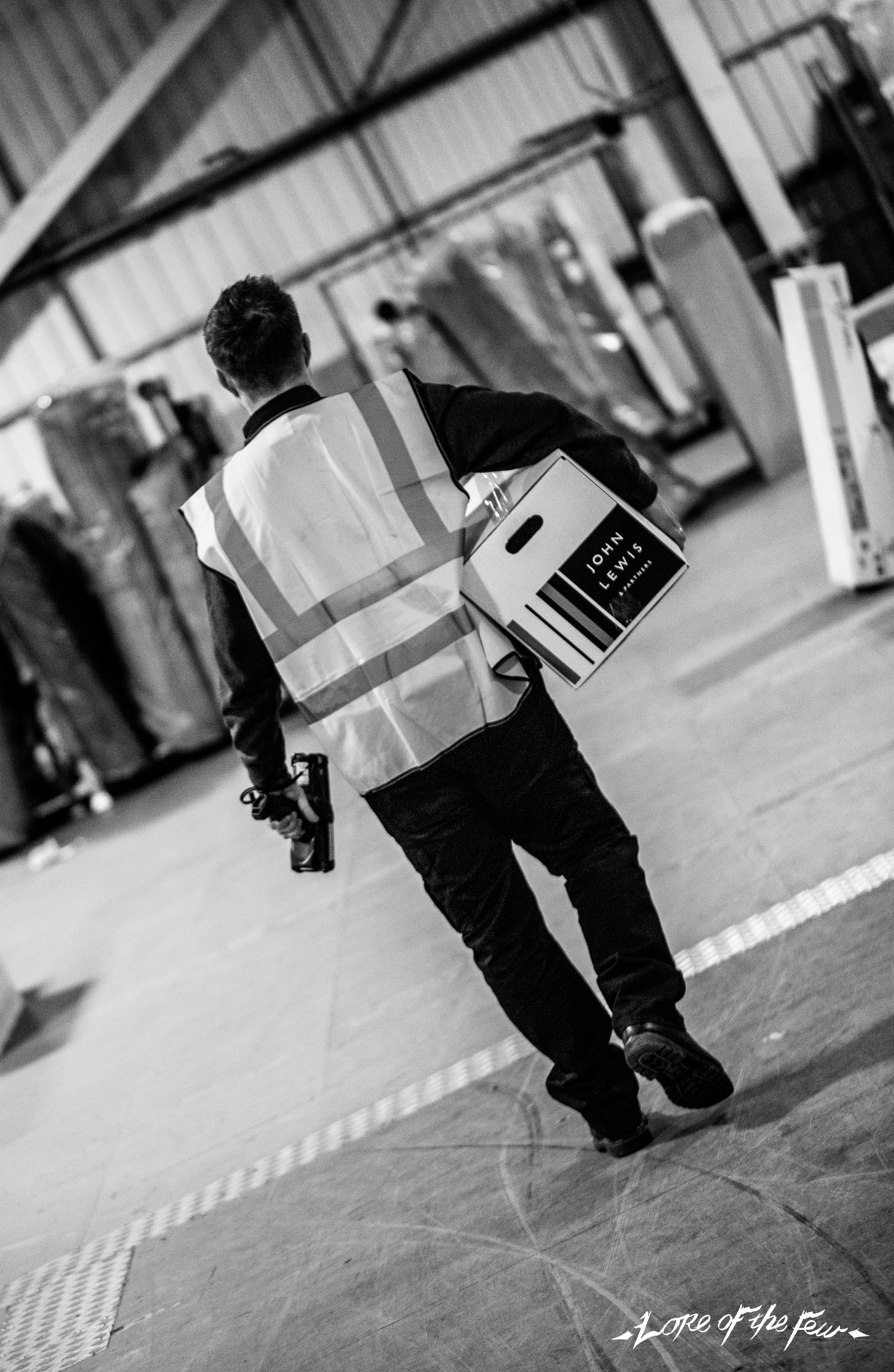 Not too long ago I was commissioned to take a bunch of photos for a little company called John Lewis & Partners. The principle idea was to capture a tiny portion of the monstrous distribution sector of the business, more specifically, customer delivery. I was tasked with taking photographs mostly following the process of stocked goods, to collation, to delivery and overall, I believe I achieved that… With just a bit of staging.

The company or ‘Partnership’ as it is preferred, had just recently rebranded and while many were a fan of the classic British Racing Green colour scheme they adopted for so long, black and white was the new way forward. It’s a lot trendier you could argue and perhaps down with the kids as they say but I used it as an excuse to process the images in a similar likeness.

I’ve always loved black and white photography but I’m still figuring out why. Perhaps it’s the mysterious sensation of perceiving monochrome lines and shapes far reaching from our usual sight, or maybe it’s the vintage look that exudes classicism and evokes an unwarranted notion of nostalgia?? Though honestly, it’s a good way to fix poor lighting and shoddy colour balance in post.

The final images were printed on quality laminated canvas to be hung in the lobby of the Brooklands branch. The wide-angle lorry shot was blown up and covered five vertical canvases for a huge split canvas effect. They were all but perfect, if it wasn’t for the one in the centre that was slightly misaligned during the printing phase but only the eagle-eyed will spot it hopefully. That took care of one of the two walls I had to jazz up at least. The other wall was way trickier to plan for.

17 of the photos I’d edited and picked for the wall, were to be cropped and printed individually but somehow occupy a 1.90m squared area while simultaneously being 1 inch apart from each other. As if using two systems of measurement wasn’t hard enough, half the canvases needed to have a black colour wrap while the other half needed to be white and not only that, they had to be dotted around to vary it up a bit.

It took me so long to suss out the best combination, and in the end, I made an equivalent version on another wall using brown packaging paper, just so I could get it into the skull what it may look like. This visualisation helped a bunch when it came to ordering the canvases but I ended up inputting the wrong dimensions on one of them by a bloody inch! I tried to see if I’d get away with it but nope, it looked so out of place. Ordered a replacement and although it fit perfectly the quality of the print wasn’t as nice. It doesn’t hurt to be meticulous with this sort of thing to avoid such setbacks.

A few of the canvases were destined for the upstairs canteen but this feature wall was going to be somewhat different. Brooklands has quite a lot of engineering history from way back when it was a motor racing circuit in the early 1900’s and then later Britain’s largest aircraft manufacturing centre. The local area also accommodated one of the country’s first airfields and has since been transformed into a museum worth taking a gander.

With this trivia in mind I decided to mix and match my current photography with classic racing photography of the era. A bit of a then and now kinda thing. I’m no stranger to the local antiquity but I was fascinated to see how many women drivers there were back then. So, I thought John Lewis being the forward thinking, diverse business it is, might appreciate this delightful piece of olden times up on the wall as well. My favourite was of the respected mechanic, Miss J Alwyne, dressed in her jumpsuit half underneath a dinged-up motorcar, cigarette in mouth, making adjustments to the rear wheels. Health and safety were definitely not chief priorities back then.